It's finally here: the final season of Game of Thrones. Everyone is bracing for the worst: which of our all-time number one favorite characters will die first? Who will end up on the Iron Throne? Will the Iron Throne even exist when it's all over? As everyone huddles together each week to consume these answers in perfect silence, we want to remind you that it's also your last chance to experience the kingdoms of Westeros through memes.

So here's your first batch of the final chapter of Thrones memes. Enjoy them while you can, because in just a few short weeks your group chat will have to find a whole new way to express their emotions.

It's the Moment We've All Been Waiting For 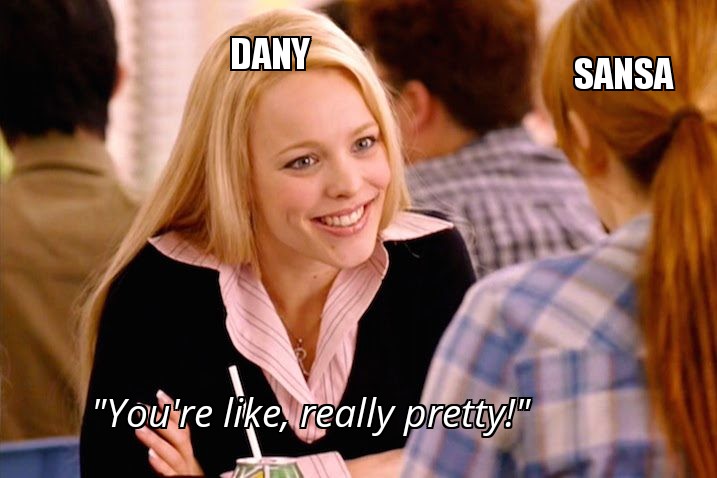 Well, sort of. Daenerys's arrival at Winterfell kicked off this last episode, and the tension between her and Sansa was extreme. Maybe it was jealousy, maybe it was fear, maybe it was both and also the whole "we're all in constant, grave danger" vibe that's happening there. Anyway, we hope they can be friends, eventually.

"At least I can go home now my brother is lord." Dany: from r/freefolk

Whoops, she did it again. This was the moment Dany reminded Sam and all the viewers at home that she's more than just an inspiring leader, she's also a stone cold ruler whom you shall not mess with. And Sam? Well, he's just such a nice guy.

If ever there was a time for a crossover. #GameofThrones pic.twitter.com/lJGuc4YCap

But honestly, this moment opens the door for many, many crossover opportunities at HBO. Maybe with some of the other shows that are ending this year? Cough cough?

There Must Always Be Awkwardness At Winterfell

The north is clearly not the most welcoming place in Westeros. Additionally it's not exactly what one might call "diverse" so, we'd like to send our thoughts and prayers to Missandei and Grey Worm for braving the cold weather and the cold stares. 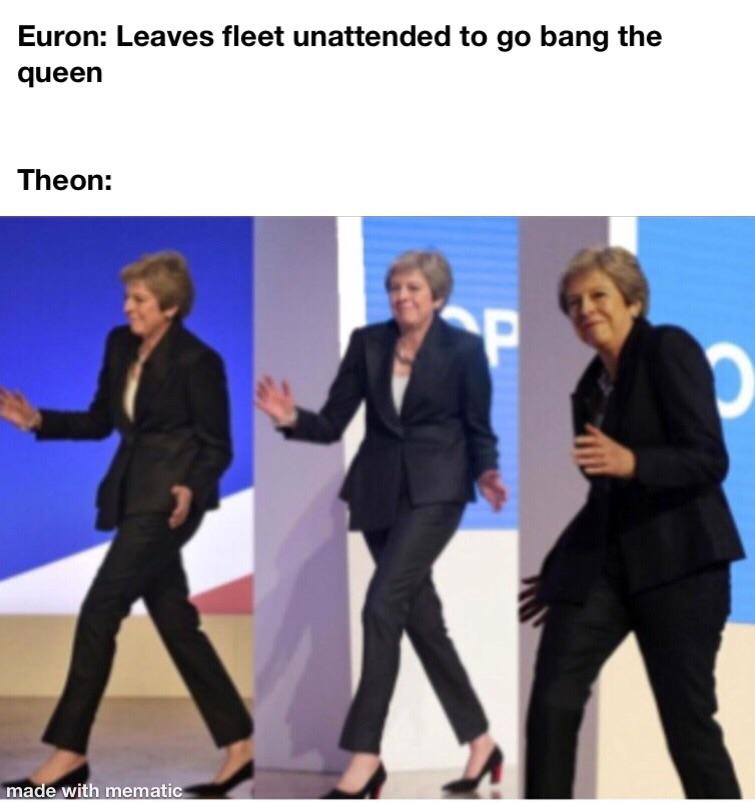 Theon gets his fastest redemption arc yet, and he even looks better. Like he's finally drinking more water and getting eight hours of sleep and waking up early to stretch and eat kale. He also saves Yara from the clutches of their uncle before heading off to go do more hero stuff. He's back, baby!

And Now the Moment We've Actually All Been Waiting For

If you thought you couldn't wait to see what was next for Jon Snow and his actual aunt Daenerys Targaryen, well you have nothing on Drogon. Dany's favorite dragon ended up watching Westeros's newest and grossest couple as closely as the audience. Dragons, they're just like us! 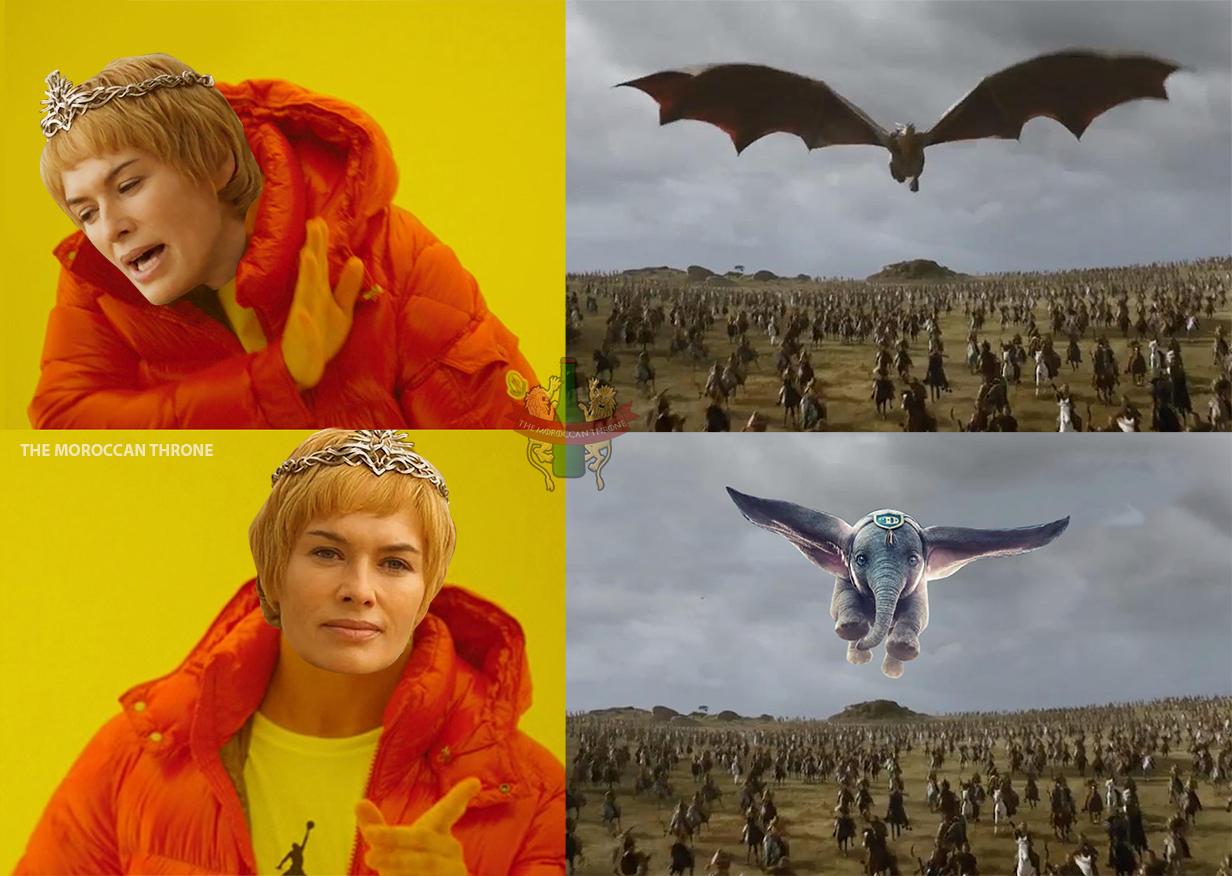 Everyone Ended Up a Little Disappointed 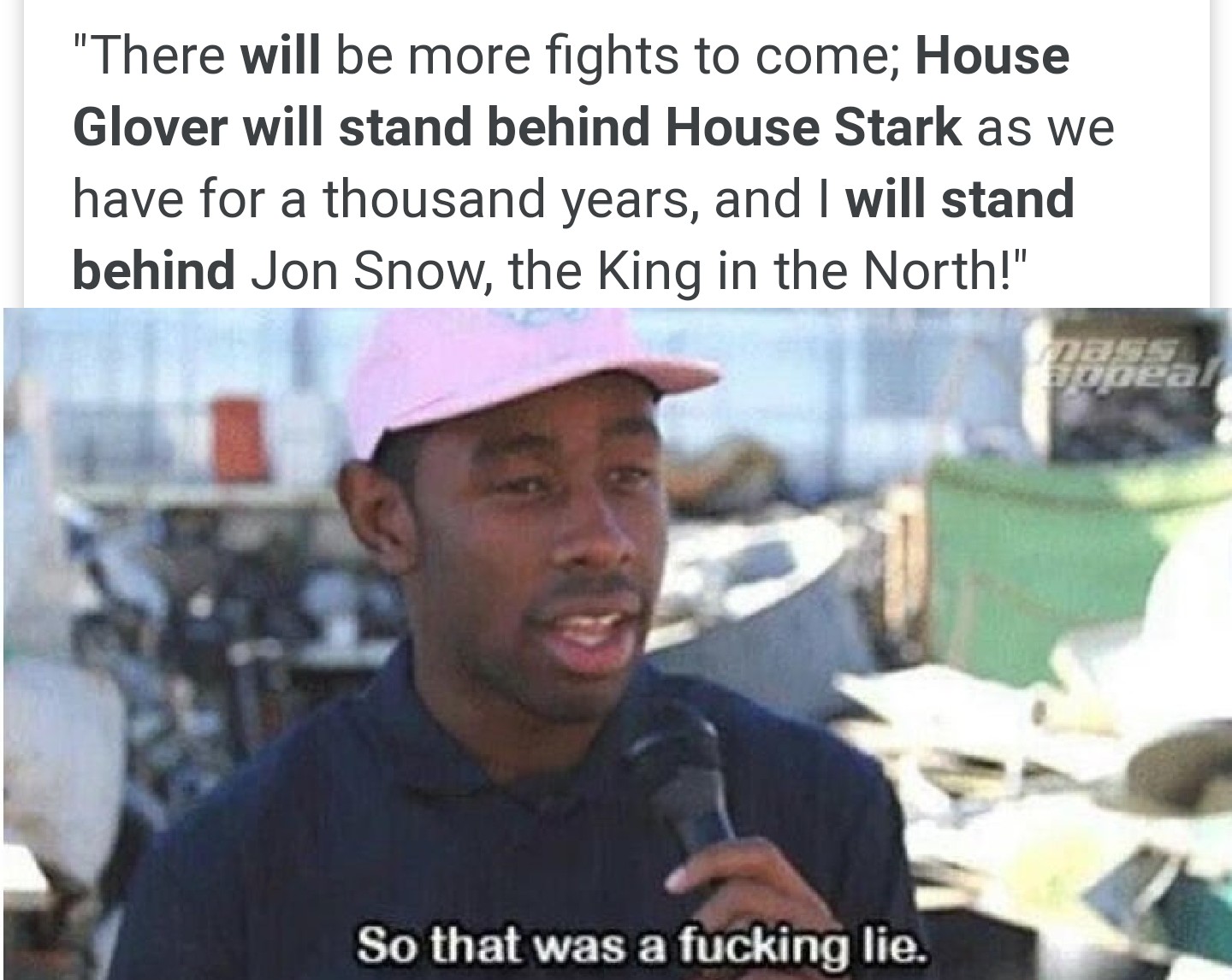 Once again, House Glover went ahead and disappointed just about everybody by doing exactly the opposite of what they said they'd do. Of course, this was probably a bad choice considering what happened to House Umber, who also decided to just kinda do their own thing.

Arya Is Still Here Though

And if we all think and pray hard enough, she gets to stick around forever, right? Right?! Come on, man, just give us this one. Take anyone else. Take Bronn! Remember Bronn? Yeah we like Bronn and all but he's no Arya. Plus, he's getting a little bit... sneaky. 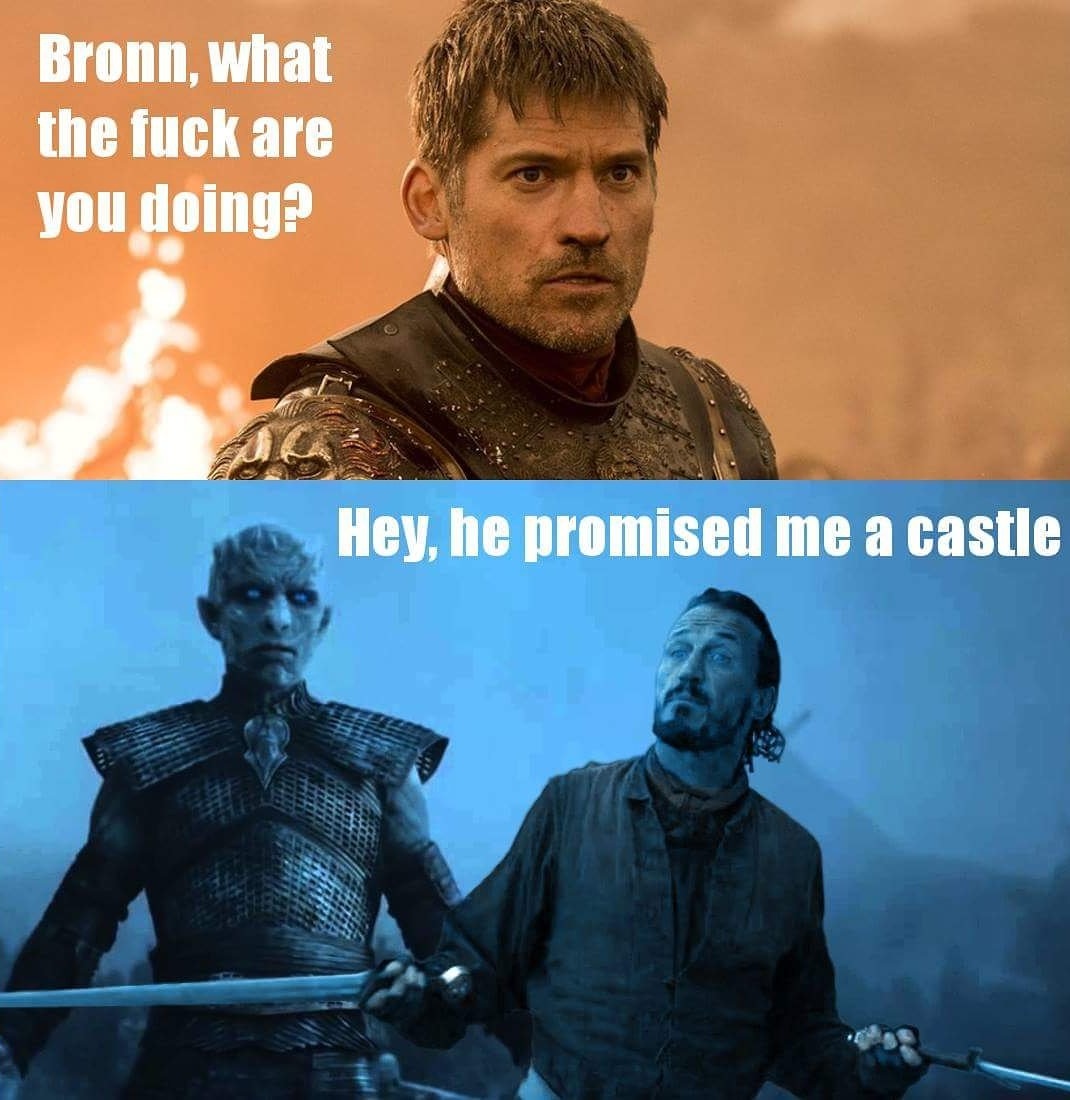 Look, Westeros exists in a world without steady incomes, upward mobility, or Zillow. So if Bronn finally wants to get that castle he's always dreamed of, he's going to have to get really, really creative. And he also needs to bundle up. 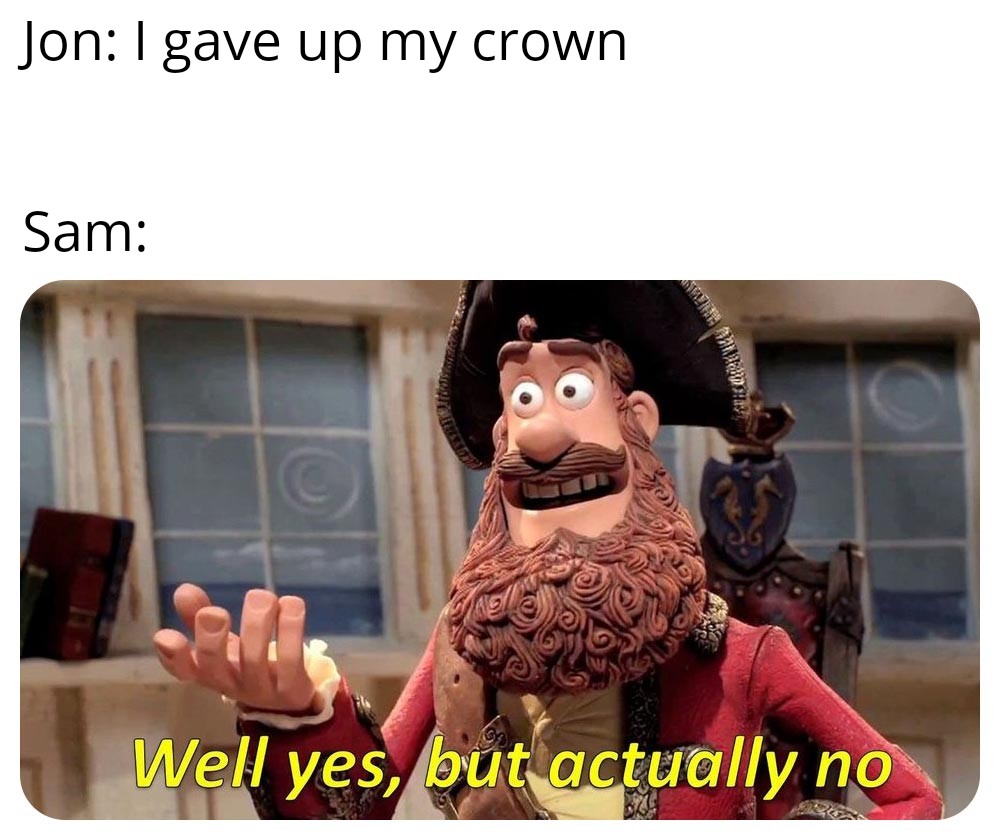 It was a little like a gender reveal party except the baby was born decades ago, there's no party, we already know his gender, and it's just telling a grown man that he is technically the rightful heir to the Iron Throne. It's what they call "a lot to take in," especially when this means you just realized your girlfriend is actually your family. 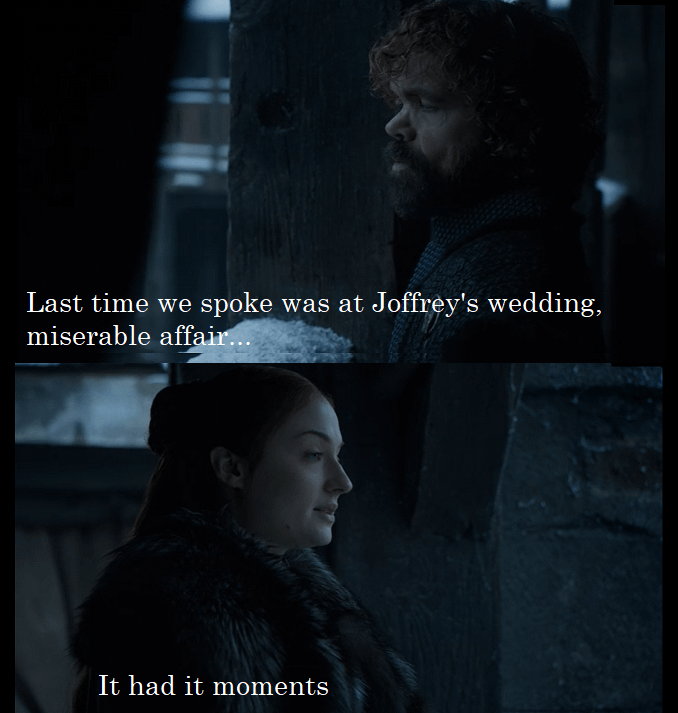 You know how when two separate groups of friends get together and some people meet who you haven't seen together in a long, long time and suddenly you remember that actually they were married? This was basically that situation. Anyway, for being exes, they had a surprisingly fun interaction.

The show has a new title sequence! Hooray! That appears to show the advancement of the Night King's Army! Boo! And particularly astute viewers knew immediately that Last Hearth, named so because it is the Last Hearth before you get to the wall, was overtaken by the army of the dead. So when Lord Umber headed back home he uh, probably wasn't coming back.

But he did pose one final threat to the handheld snacks of fans everywhere thanks to his perfectly timed, bright blue eyed squeal of death. Don't worry, the Night King just wants to make sure you don't get any sleep at all until May.

Me watching the scene with the Umber boy from r/freefolk

We Need to Talk About Bran 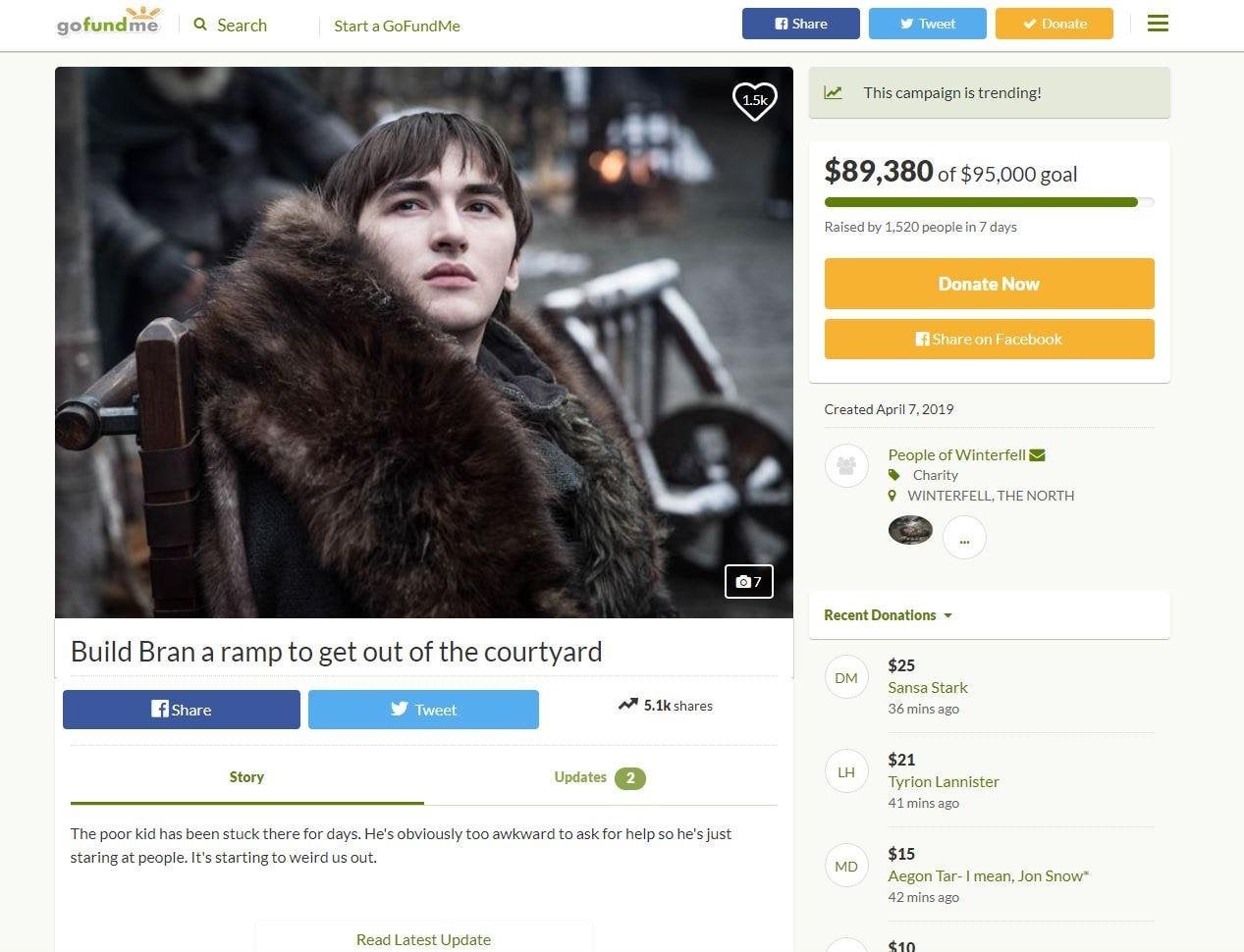 Bran is the glue that (kind of) holds the premiere together. Or at least, he's the only one with the chutzpah to consistently remind everyone that there is no time. 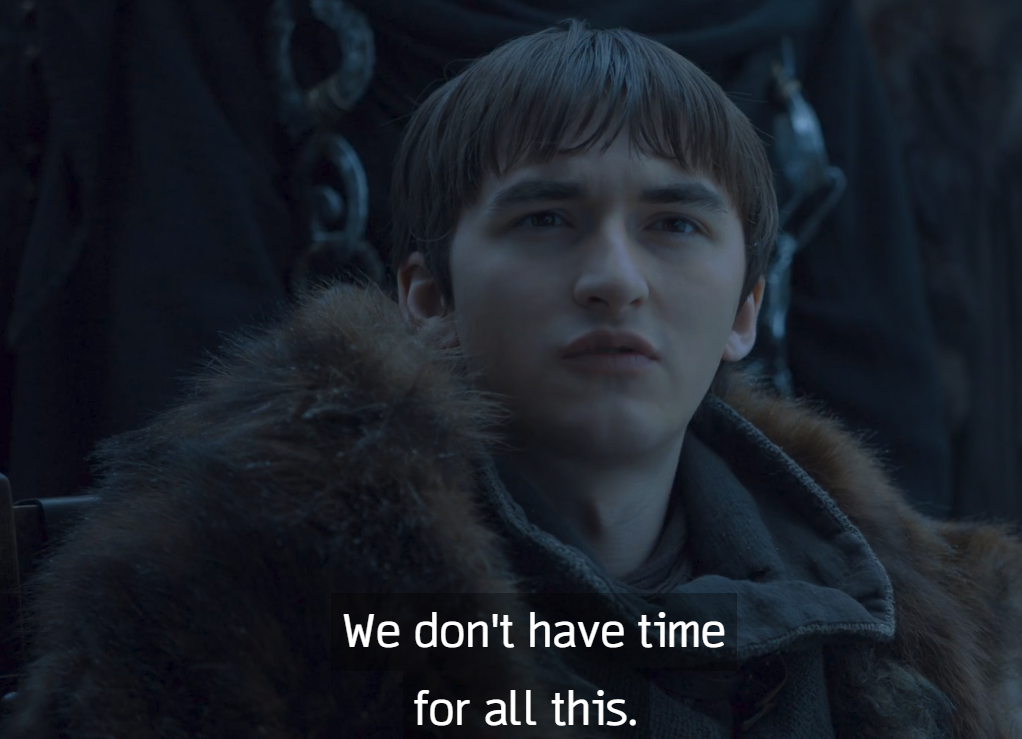 Like, literally, he wants you to understand that there is actually no time for anything that happens in this episode at all. And he accomplishes this, apparently, by just kind of... staring... at everyone... all the time... no matter where they go.

Seriously dude wtf is wrong with you?

But Bran's biggest stare of all comes in the final scene of the episode, when the biggest reunion you totally forgot about finally happened. And if you thought any of the above moments were awkward or uncomfortable or unpleasant? Just wait.

Don't you just hate it when you show up to a castle to help with the fight against death incarnate and end up face to face with the child you tried to murder to cover up the affair you were having with your own sister? So awkward, right?

There's still hope for redemption, or at least the makings of a fantastic and heartwarming buddy comedy starring two of the unlikeliest of friends.

And Now a Quick Recap 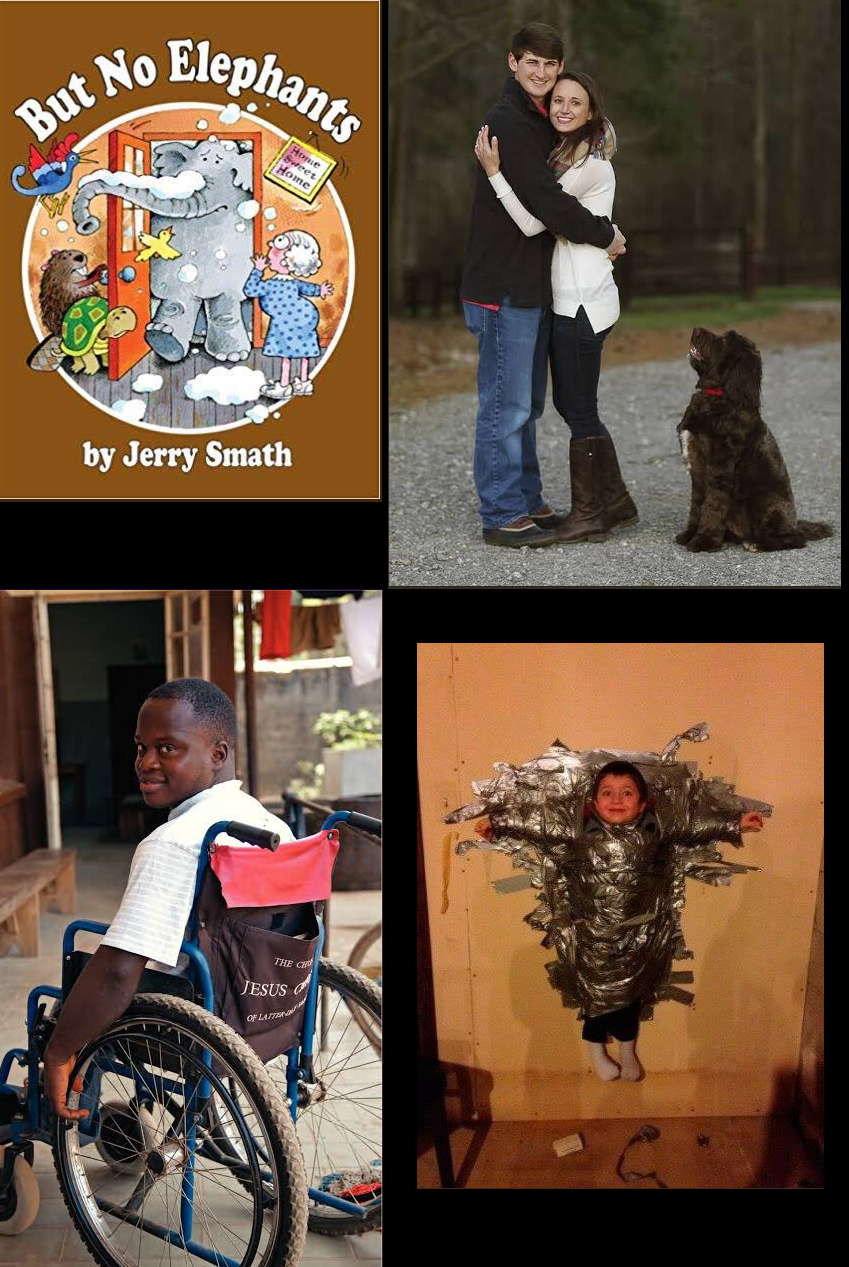 Just in case that was too much to take in, there's a handy cheatsheet to keep you current in your various email threads and group chats or around the water cooler at work. Do people still talk around water coolers in offices? Or do people just IM while drinking water?

Not All Heroes Carry Swords