Twitter user @blacksmoke1033 shared the story of how he finally captured the small time crook who'd been terrorizing them.

This cretin has been dropping sticks down our chimney for weeks and today he finally accidentally dropped himself, this is the face of someone who knows they’ve been HAD pic.twitter.com/VlVIt9dqwG

Non-fireplace owners may not realize that birds trying to build their homes in your chimney isn't ideal. In fact, it's pretty bad! It's dangerous for both the humans and the bird, but that didn't stop this guy from trying anyway. And he can't believe it's such a big deal to anyone, probably because he doesn't understand fire.

This little criminal just got caught and he looks so offended? pic.twitter.com/kKxO1Bf9EU

When @blacksmoke1033 shared these photos on Twitter, they because a huge hit thanks to this little guy's refusal to be shamed. Don't we humans get it? *We're* the problem, actually, because we build chimneys that are perfect for nests, but we don't put nests in them! What's with that, anyway?

Here’s some disgruntled pics - don’t worry, he was well enough to scream and bite us and he flew away just fine! He’s off to tell his mates about alien abduction pic.twitter.com/EcIYeLh7li

@blacksmoke1033 was extremely gentle to the bird, it's just that this bird is so offended anyone would stop his stick throwing. He's a bird, after all, this is mainly what he does! These photos almost can't help but remind us of another indignant criminal: the dude who just wanted to enjoy a succulent Chinese meal! Of course, the bird was not quite so eloquent. Probably because it's not a man, but a jackdaw, and this isn't the only winged menace that the OP had been dealing with. He's just very lucky this particular human didn't hold any ill will towards these avian chimney sneaks.

- it’s a jackdaw
- they’ve been trying to build nests in our chimney but we light the fire constantly so can’t let them!
- there’s a few ‘regulars’ around here and we feed them all well, they’re greedy
- we’re not mad, just disappointed
- I still love him very much

Other users were rightfully pretty concerned about the bird anyway. No matter how nice a human may be, chimneys don't care about your feelings. And falling down one is no fun for anyone, especially a delicate precious little bird. But things seem to have worked out... fine.

Yeah a bit perplexed that he was suddenly in a kitchen but he flew away fine! Bit us both really really hard hahaha

As a bird, all you really need is the ability to bite and fly, since those will be the main activities you engage in on a daily basis. So, the bird got to bite someone, and as for us humans, well we got some funny photos, and a very teachable moment for anyone who wasn't familiar with jackdaws.

Yeah they’re pretty striking, the adults have them! I think photos of them are often mistaken for baby ravens

This is probably one of the only times something coming down your chimney with blue eyes would be considered a good thing. Especially if you are a human who lives on planet Earth and are therefore a consumer of the very important television show Game of Thrones. 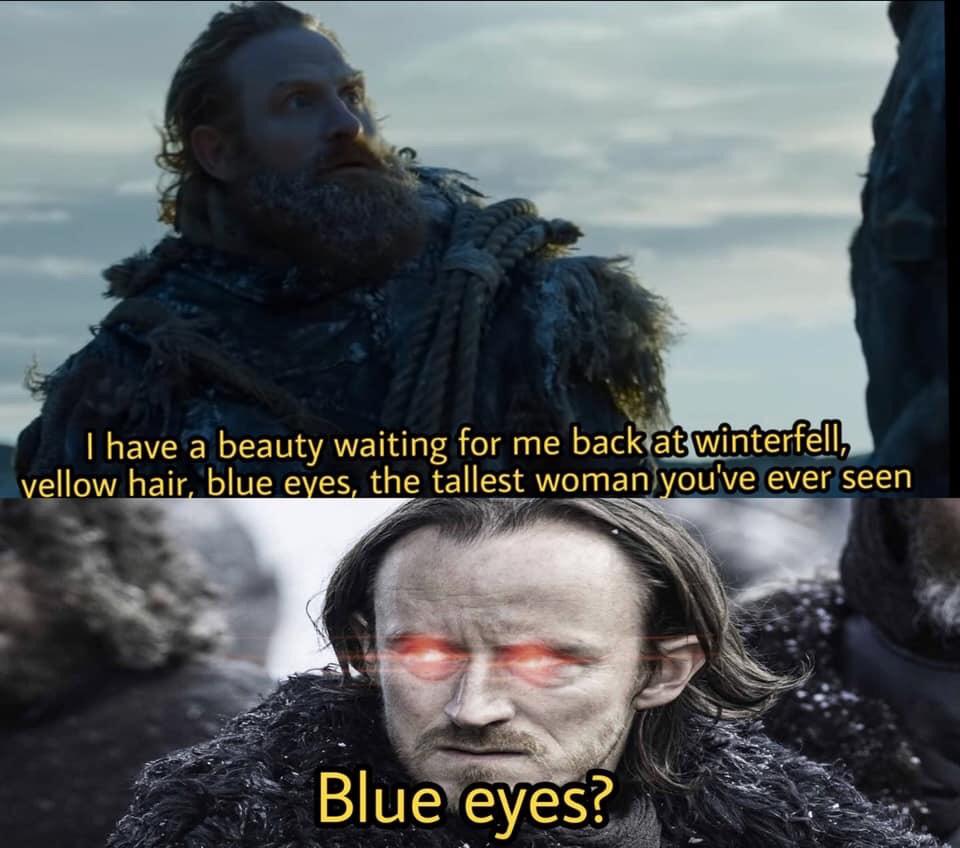 Luckily birds are not, as far as we know, members of the army of the dead. In fact, they are very much alive and very much just trying to live their lives around us. Unfortunately their cuteness also prevents many of us from doing much to let them know when something they've done is not okay.

My ‘stern talking to’ was basically exactly this hahhahaa

Probably the most ironic thing about Twitter is how little actual birds know about it. They don't even realize humans tweet too, we just do it in a way that's completely worthless. And because they have no concept of this, they also don't understand what it's like to go the good kind of viral.

We have the same mostly familiar jackdaws around the garden every day, they’re all still around and unbothered and I kinda feel like shouting ‘hey you! - yeah you in the middle! - you know when you tripped and fell into another dimension this morning? A LOT OF PEOPLE SAW THAT’

Maybe we all have a lot to learn from these birds, who are able to find joy in shiny objects instead of social media clout. Who prioritize family and home over not annoying the humans who own the chimney they're trying to build their family's home in. And who have never, ever taken a selfie.

Well, at least not on purpose. But hey, at least they're naturals when it comes to duck lips!